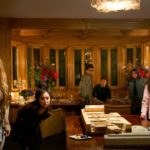 At this year’s New York Comic Con, Justin Cook chatted with the cast of Marvel’s Runaways. Check out their conversation below… Later this month, Hulu will debut its first effort in the Marvel Cinematic Universe, Marvel’s Runaways. The show brings to life Brian K. Vaughan’s beloved comic book series of the same name, with its […]

Marvel has just announced the cast for their next television production, Marvel’s Runaways. Premiering on Hulu, the series is based on the comic created by Brian K. Vaughan and Adrian Alphona and will follow a group of teenagers who discover their parents are actually apart of a supervillain cabal. The cast is as follows: Ariela Barer (New […]