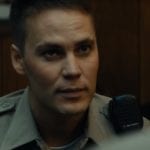 Deadline has revealed that Taylor Kitsch (True Detective) has joined Amazon Studios’ conspiracy thriller The Terminal List. Kitsch will star alongside Chris Pratt (Guardians of the Galaxy) from director Antione Fuqua (The Equalizer) and writer/showrunner David DiGilio (Strange Alien). The Terminal List is based on the novel of the same name by Jack Carr that […]