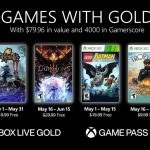 May’s Xbox Games with Gold have been revealed and there’s some nice ones to enjoy this coming month that involve delving into oceans, fighting for kingdoms and relaxing on the sun-kissed beaches of a tyrannical dictator’s island.  All games are available for those with a Gold subscription and with Xbox’s fantastic Game Pass and are […]

Digital board game Armello was released on PlayStation 4 and PC last September and was very well received with some reviews awarding scores of 80-90 out of 100.  Now developer League of Geeks have announced that Armello will finally be coming to Xbox One on August 30th, and on that very same day the first major DLC, titled The Usurpers […]