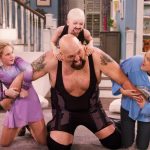 Netflix has announced that it has cancelled its multi-camera comedy series The Big Show Show starring Paul Wight – a.ka. WWE Supertar The Big Show – along with fellow sitcom Ashley Garcia: Genius in Love. Both series lasted for just a single season, and will conclude this December with Christmas Special episodes which were already […]