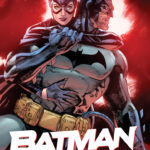 DC Comics has announced that Tom King will be leaving the main Batman title in December 2019 to write a new 12-issue Batman/Catwoman series launching the following month. “Batman and Catwoman is a chance to do what Morrison and Quietly did in Batman and Robin: launch an ambitious, accessible, beautiful, thrilling new series that concludes […]