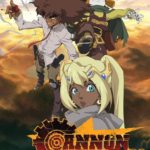 Erika Hardison reviews Netflix’s Cannon Busters… As a huge fan of The Boondocks, I was excited to hear LeSean Thomas heading his own project with Netflix. Starting off as a comic book that turned into a successful Kickstarter, the buzz around his project was kept under wraps for quite some time until news broke that […]