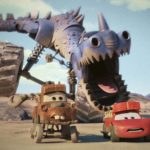 Disney and Pixar have released a poster and trailer for the animated series Cars on the Road. The Disney+ Original spinoff sees Owen Wilson and Larry the Cable Guy reprising their voice roles as Lightning McQueen and Mater and follows the friends as they embark on a road trip to attend Mater’s sister’s wedding; check […]