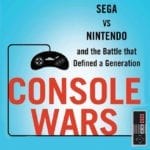 If you cast your mind back to 2014, you may recall that Seth Rogen and Evan Goldberg signed on to write a feature film adaptation of Blake J. Harris’ book Console Wars, which explores the battle for video game supremacy between Nintendo and Sega during the 1980s and 1990s. While the movie failed to materialise, […]