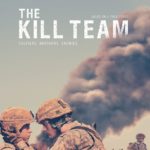 A24 Films has released a poster and trailer for the upcoming action thriller The Kill Team. Written and directed by Dan Krauss, it stars Nat Wolff as a young soldier who begins to fear he might be the next target of his violent platoon after witnessing the murder of innocent civilians under the orders of […]