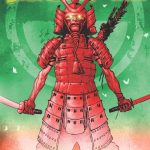 AfterShock launches its new comic book series Disaster Inc. this Wednesday, and you can check out a preview of the first issue right here… In 2011, the worst earthquake in Japan’s history breached the costal Fukushima Daiichi power plant, causing three of its four nuclear reactors to melt down. Forced evacuations followed as the event […]