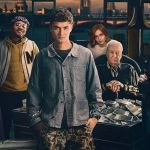 Sky Cinema has released a poster and trailer for Twist, the upcoming modern retelling of the Charles Dickens classic Oliver Twist. Directed by Martin Owen, the film features a cast that includes newcomer Raff Law alongside in the title role alongside Michael Caine (The Dark Knight) as Fagin, Lena Headey (Game of Thrones) as Sikes, Rita […]

Rocket League from Psyonix has over 150 awards under its virtual bonnet; add to that a plethora of rather excellent DLC’s, new game styles constantly being added and a huge eSport championship which stretches across the globe, and it’s fair to say this game is massive.  Now with this latest DLC it turns to one […]