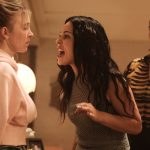 Streaming and cable networks obviously dominate almost every awards show, and the GALECA: LGBTQ Entertainment Critics Dorian TV Awards is no expectation. Though, one streamer, in particular, led the pack with an outstanding 24 nominations. HBO and HBO Max took home the most nominations for the Dorian TV Awards, an annual award show thrown by […]