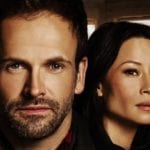 CBS has announced that its modern Sherlock Holmes reimagining Elementary is set to come to an end after its upcoming seventh season. The series launched in 2012, and stars Jonny Lee Miller as Sir Arthur Conan Doyle’s master detective along with Lucy Lui as his partner Dr. Joan Watson, with the two investigating cases in […]

John Noble, who gave an incredible performance as an eccentric but damaged genius on five seasons of Fringe, will now play the father of another enigmatic intellectual, on CBS’ Elementary.  According to THR, Noble has joined the series’ upcoming fourth season as the wealthy and estranged father on Sherlock Holmes (Jonny Lee Miller). He’ll make his debut […]

Robert Downey Jr., Jonny Lee Miller, Ian McKellen and Benedict Cumberbatch have all played Sherlock Holmes in either film or television during the last four years. Now I know that people say that Hollywood reproduces the same shlock year on year, but when it is literally the same character stories recreated, within the time it […]