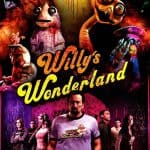 Ever since the trailer for the new horror film, Willy’s Wonderland, was released a few weeks ago showing Nicolas Cage massacring demonic animatronics, the internet has been buzzing about this film. Directed by Kevin Lewis and written by G.O. Parsons, the film’s official description reads: A quiet loner (Cage) finds himself stranded in a remote […]