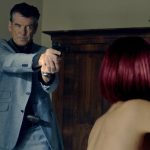 Deadline is reporting that Pierce Brosnan has been cast in Fast Charlie, an adaptation of Victor Gischler’s Edgar Award-nominated novel Gun Monkeys which is being directed by Phillip Noyce (Patriot Games, Salt) from a script by Richard Wenk (The Magnificent Seven, The Equalizer). The film will see Brosnan playing Charlie Swift, “who has worked for his […]