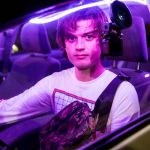 Ahead of its release this August, a red band trailer and images have been released for the upcoming thriller Spree which stars Stranger Things’ Joe Keery as a rideshare driver who will stop at nothing to gain social media attention and attempts to gain infamy by going on a brutal rampage, until a stand-up comedian […]