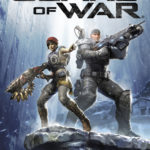 The Gears 5 prequel novel Gears of War: Ascendance from New York Times bestselling author Jason M. Hough is out now, and we’ve got a copy of the book to give away thanks to the lovely folk at Titan! Read on for details of how to enter… Following Reyna Diaz’s death at the hands of […]

Titan Books has announced the upcoming release of Gears of War: Ascendance, the official bridging novel to the hotly-anticipated Xbox game Gears 5. Following Reyna Diaz’s death at the hands of the Swarm, Kait seals her mother’s tomb, swearing revenge. She and her teammates are called to New Ephyra and told their “crimes” will be […]