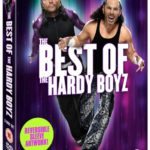 Twist of Fate: The Best of the Hardy Boyz, 2018. SYNOPSIS: A compilation of matches and moments from the storied careers of Matt and Jeff Hardy, culminating in their return to WWE and narrated by fireside anecdotes at the Hardy Compound. I missed the Attitude Era first time around. I first started watching wrestling in […]

Oli Davis rounds up the biggest professional wrestling news in his daily WrestleTalk column… Both the Raw and Smackdown rosters are currently on one of WWE’s most gruelling schedules of the year: the European tour. You’d think travelling between countries and staying in different hotels would hinder a wrestler’s strict diet. But not for ‘No […]

Oli Davis rounds up the biggest professional wrestling news in his daily WrestleTalk column… Free speech is a tremendous force for social change. It’s been the catalyst for racial equality, it’s the mechanism by which citizens can openly criticise their governments in free societies, and it also means we once got to name a research […]

Oli Davis rounds up the biggest professional wrestling news in his daily WrestleTalk column… Courtesy of the Wrestling Observer Newsletter, more information has come out on the Vince McMahon movie being overseen by Vince McMahon. Apparently the project was actually shopped around Hollywood last Summer, and was said to be very good, but because WWE […]

Oli Davis rounds up the biggest professional wrestling news in his daily WrestleTalk column… The Hardy Boyz might be taking on Sheamus and Cesaro at Payback, but first, Matt must defeat Karl Ander Son – that is to say, the son of Karl Anderson – for the tag team titles, as the Good Brother tweeted: […]

With Kevin Owens and Samoa Joe seemingly aligning with Triple H, many are speculating that we could be seeing the formation of The Authority 2.0. If, for some bizarre reason, you want to relive The Authority’s first incarnation, you can pick up WWE’s official comic book that’s been detailing Seth Rollins siding with the McMahon-Helmsley […]