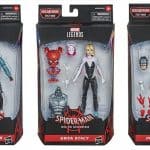 Hasbro has revealed a new wave of Marvel Legends Series figures which includes Miles Morales, a Gwen Stacy & Spider-Ham 2-pack, Peter B. Parker, and Prowler from the award-winning animated feature Spider-Man: Into the Spider-Verse, a Thanos action figure inspired by his appearance in The Infinity Gauntlet, and Spidey characters Frogman and The Hand Ninja; […]

Subscribe on YouTube for new episodes every Friday. Support Flickering Myth, buy a t-shirt! Join Oli and Luke as they count down their Top 5 Easter Eggs in the Marvel Cinematic Universe for this Scooperhero News Special, including giant Iron Man dragon villains, a female Ultron, the Infinity Gauntlet that wasn’t meant to be and […]