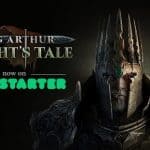 NeocoreGames has announced that they have launched the crowdfunding campaign for King Arthur: Knight’s Tale on Kickstarter.  This tactical turn-based RPG is a modern retelling of the classic Arthurian mythology story combined with dark fantasy tropes that contrast with the traditional chivalric tales.  A new trailer for this can be seen below… In this deeply […]