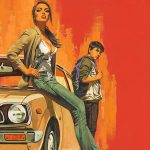 Another Stephen King project looks to be heading to the small screen, with Deadline reporting that Blumhouse Television has set Lucy Liu to star in a limited series adaptation of the author’s 2021 Hard Case Crime novel Later. The adaptation is being created by Raelle Tucker (True Blood) and will see Liu playing literary agency […]