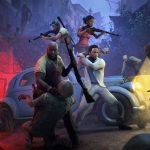 It’s time for Alpha Squad to tackle a new mission in the latest DLC for Zombie Army 4: Dead War and this time they have to ‘Return to Hell’.  This new DLC is available to those players who own Season Pass 3 and also able to be purchased as a standalone.  Alongside this new mission is […]

Turtle Rock Studios, of Left 4 Dead and Evolve fame, have revealed that they are working on a new IP set for 2018. Originally published over at gameindustry.biz, Phill Robb of Turtle Rock Studios stated: “We are developing a new franchise set in an all new universe that leverages the style of gameplay our community loves […]

Rebellion and Valve have teamed up to bring a mind-bending, time-shifting crossover between two beloved zombie-massacring series by releasing a free update for the PC edition of Zombie Army Trilogy which brings the survivors from Left 4 Dead and Left 4 Dead 2 into the game. And that’s not all, as there’s also a free […]

Left 4 Dead 3 could still happen one day, despite the series being quiet now for five years. A developer at Turtle Rock, the studio behind the upcoming 4v1 survival game Evolve, has stated that people would certainly be interested in making another Left 4 Dead. Speaking to PC Gamer, Turtle Rock co-founder Chris Ashton […]