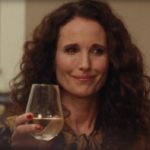 Ahead of its US release next month, IFC Films has debuted a new trailer for Russell Harbaugh’s feature directorial debut Love After Love. The drama had its world premiere at last year’s Tribeca Film Festival where it was met with positive reviews, and features a cast that includes Andie MacDowell, Chris O’Dowd, Francesca Faridany and James Adomian; […]