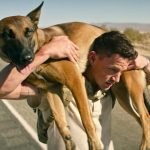 With a little over a week to go until its release, a new trailer has arrived online for the upcoming comedy-drama Dog. Directed by Reid Carolin and Channing Tatum, the film stars Tatum as a former Army Ranger who agrees to take a troubled Belgian Malinois on a road trip to their fellow soldier’s funeral […]