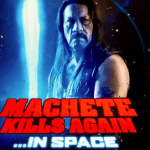 It looks like Robert Rodriguez and Danny Trejo are set to round out their Machete trilogy, with Trejo revealing at the Mad Monster convention in Charlotte, NC that he’s set to reprise the role of the ex-Federale for Machete Kills Again… In Space!. “Robert and I are going to start to do Machete Kills In […]