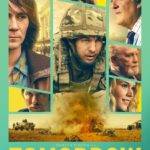 Ahead of its UK release next month, a poster and trailer have arrived online for the upcoming drama Tomorrow. Directed by Martha Pinson and produced by Martin Scorsese, it stars Sebastian Street as a former soldier suffering from PTSD and struggling through life until he meets a friend (Stuart Brennan). The film features a cast […]