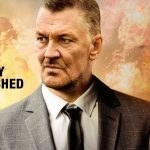 Saban Films has released a poster and trailer for the US release of the British crime thriller Villain which stars Craig Fairbrass as Eddie Franks, an ex-convict who finds himself drawn back into a life of crime; take a look here… VILLAIN follows the harrowing journey of Eddie Franks (Craig Fairbrass). After being released from […]