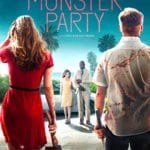 Jordan Jones lists seven NES titles you may have missed… When I was very young, one of my weekend traditions was going to the family-owned video store down the street to rent a game for my NES. I would spend upwards of an hour deciding which of the countless games lining the store walls would […]