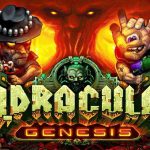 Indie developer Moregames has announced the release of their retro-fueled twin-stick roguelike game, I, Dracula: Genesis, on Steam Early Access.  This hard-as-nails twin-stick shooter will see players fight their way through procedurally generated worlds taking on a variety of monsters, demons and aliens.  See more in the trailer below…. I, Dracula: Genesis takes players to a post […]