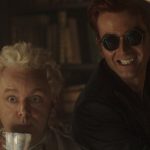 Back in June, Neil Gaiman announced that Michael Sheen and David Tennant would be reprising their roles as Aziraphale and Crowley for Good Omens 2, a follow-up to the 2019 adaptation of his and Terry Pratchett’s 1990 fantasy comedy book, and the writer and showrunner has revealed this past week that filming on the new […]