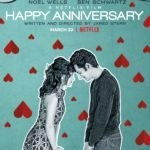 With a little under two weeks to go until its arrival online Netflix, the streaming service has released a new poster and trailer for its romantic comedy Happy Anniversary. Written and directed by Jared Stern, the film stars Noël Wells, Ben Schwartz, Annie Potts, and Joe Pantoliano; take a look at the poster and trailer […]

Netflix has released a poster and trailer for writer-director Jim Strouse’s upcoming comedy The Incredible Jessica James which stars Jessica Williams, Chris O’Dowd, Lakeith Stanfield, and Noël Wells; check them out below… Jessica Williams (“The Daily Show”) stars as a young, aspiring playwright in New York City who is struggling to get over a recent breakup. […]

With a little over a month to go until The Incredible Jessica James arrives on Netflix, the streaming service has released a teaser trailer for writer-director Jim Strouse’s upcoming comedy which stars Jessica Williams, Chris O’Dowd, Lakeith Stanfield and Noël Wells; watch it below after the official synopsis… Jessica Williams (“The Daily Show”) stars as […]