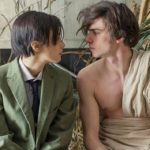 Coinciding with its world premiere at the Inside Out LGBT Film Festival, the first poster and trailer have arrived online for the upcoming supernatural drama Octavio is Dead! Written and directed by Sook-Yin Lee, the film stars Sarah Gadon, Raoul Trujillo, Dimitris Kitsos, and Rosanna Arquette; take a look here… Octavio is Dead! Is an intense and otherworldly […]

According to Variety, an upcoming ghost story film from Year of the Carnivore director Sook-Yin Lee is about to begin production, and just found its three stars. Titled Octavio is Dead!, the movie will shoot in and around Toronto from January 22nd to February 13th, and will star Rosanna Arquette (Pulp Fiction, Ray Donovan), Sarah Gadon (11.22.63, Indignation) and […]