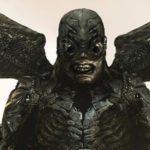 After catching a brief glimpse in Bruce Wayne’s nightmares during Batman v Superman: Dawn of Justice, we’ll presumably be seeing plenty of the Parademons this November when Steppenwolf brings the forces of Apokolips to Earth in Justice League. However, while we await the DC blockbuster, production designer Patrick Tatopoulos has shared a piece of concept […]

UPDATE: It seems that Cosmic Book News has been making stuff up again, as Premiere has stated that the interview in question never happened. Original story follows… Earlier this month, Warner Bros. unleashed the third trailer for Batman v Superman: Dawn of Justice, which confirmed that as well as fighting each other, The Dark Knight […]