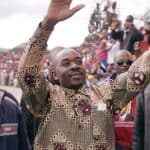 President, 2021. Directed by Camilla Nielsson. SYNOPSIS: Zimbabwe is at a crossroads. The leader of the opposition MDC party, Nelson Chamisa, challenges the old guard ZANU-PF led by Emmerson Mnangagwa, known as “The Crocodile.” The election tests both the ruling party and the opposition. A “sequel” to Camilla Nielsson’s 2014 documentary Democrats, President returns viewers to Zimbabwe to […]