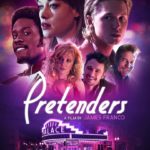 Ahead of its release this October, a poster and trailer have arrived online for the upcoming drama Pretenders. Directed by James Franco, who also stars in the film, it focuses on a love triangle involving a film student, his best friend and an actress, and features a cast that also includes Jack Kilmer, Shameik Moore, […]