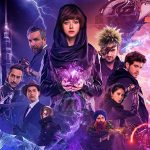 Ahead of its home entertainment release next month, a trailer has arrived online for the Russian steampunk fantasy adventure Abigail. Written and directed by Aleksandr Boguslavskiy, the film stars Tinatin Dalakishvili as a young woman who discovers her city is full of magic after going against the authorities to search for her father who was taken […]