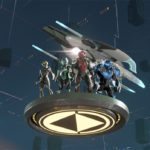 Streaming service Netflix has released a first trailer for ReBoot: The Guardian Code, a live-action/CG hybrid revival of the 90s CG-animated TV series ReBoot. In development since 2013, the series is described as a spiritual successor to the original show, and follows four teenagers who become the Next-Generation Guardians of Cyberspace with the help of an […]

Subscribe on iTunes. Support Flickering Myth, buy a t-shirt. Email in your questions: oli@flickeringmyth.com Join Oli and Luke in this week’s Flickering Myth Podcast for… SCOOPERHERO NEWS – Following Ben Affleck’s departure from the director’s chair, Warner Bros. might’ve already found a replacement for The Batman – which although they’re “very happy” with the script, still […]