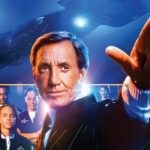 Mill Creek Entertainment has that the complete series of the Steven Spielberg-produced 1990s sci-fi SeaQuest DSV is set for a Blu-ray release later this month; check out the cover artwork and details below… Dive into 57 episodes of all 3 seasons of the iconic series executive produced by Steven Spielberg! In the mid-21st century, Captain Nathan […]