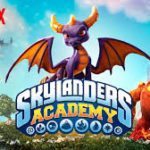 With a little over two weeks to go until the second season of Skylanders Academy arrives on Netflix, the streaming service has released a new trailer for the animated series which you can watch here… Skylanders Unite! The Skylanders are back in action protecting the realm in a new trailer for season two! In the […]