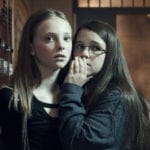 Red Stewart chats with Sophie Grace about Terror in the Woods… Sophie Grace is an American actress who has been in the film and television industries since the late-2010s. She recently starred in the Lifetime movie Terror in the Woods, which is set to premiere on the channel worldwide on October 14th. Flickering Myth had the […]