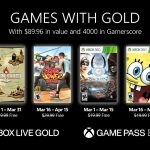 Microsoft has announced the offerings coming to Games with Gold this March and in my opinion it’s one of the better months we’ve seen for a while.  The trip down memory lane with the Xbox 360 titles (available with backwards compatibility) are particularly welcoming. Throughout March, players can download The Flame in the Flood.  This survival […]