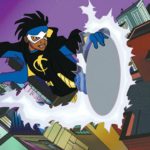 The CW launched its latest DC series Black Lightning last month, and while a decision is yet to be made as to whether Cress Williams’ Jefferson Pierce exists as part of the wider Arrowverse, plans are afoot to introduce other superhero characters into the world, with executive producer Salim Akil telling Yahoo! pinpointing Static as […]

The DC fighting game Injustice 2 arrived this past week, and while the sequel to Injustice: Gods Among Us expanded its roster of DC heroes and villains, one character who didn’t make the final cut was Virgil Hawkins. However, there were plans to include the fan favourite, as evidenced by some concept art from character designer […]