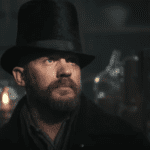 Back in March of 2017, it was announced that FX and the BBC had renewed the Tom Hardy-headlined period drama Taboo for a second series . We’ve had little in the way of updates since, but now Steven Knight – who co-created the series with Hardy and his father Chips Hardy – has confirmed to […]

With Steven Knight currently hard at work on the second season of the BBC One and FX show Taboo, the Peaky Blinders creator has been chatting to The Huffington Post about the period drama, stating that he envisions it running for three seasons in total. “I can feel the three acts,” says Knight, who created […]

The FX and BBC co-produced period drama Taboo has been renewed for a second season. The Tom Hardy-headlined series is set in the early 1800s as Hardy finds himself stuck between two relentless forces -the battling nations of Great Britain and the United States of America. BBC One and FX have obviously been pleased with how […]

A promo has arrived online for the second episode of the Tom Hardy-headlined drama Taboo; check it out here… SEE ALSO: Read our review of the first episode of Taboo here As James Delaney assembles his league of the damned; an unexpected arrival threatens to disrupt his plans. Taboo airs on Saturdays on BBC in the […]

Thomas Roach chats with Tom Hardy and Chips Hardy about Taboo… The new BBC series Taboo gets underway this weekend, and we caught up with the show’s creators Tom and Chips Hardy at the press junket, where they revealed that they have been working on the project for the last few years, and the initial idea […]

Ridley Scott is currently producing a new show for the BBC called Taboo, which stars Tom Hardy and is set to get underway this coming weekend. During the press junket we spoke to the filmmaker about how television is now viewed with streaming services such as Netflix and Amazon Prime. Scott stated that he thinks these […]

The BBC has released a new trailer for the eight-part drama series Taboo, which has been created by Tom Hardy, his father Chip Hardy and Peaky Blinders creator Steven Knight, and stars Hardy as James Keziah Delaney, a man out to reclaim his father’s shipping empire in Georgian-era London. Check it out here… Set in 1814, Taboo follows […]