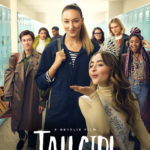 With less than two weeks to go until its arrival on Netflix, the streaming service has released a poster and trailer for the coming-of-age comedy Tall Girl. Directed by Nzingha Stewart, the film stars Ava Michelle as Jodi – the tallest girl in her high school who after years of bring made fun of finds […]

Deadline is reporting that filmmaker McG is teaming with Netflix to produce Tall Girl, a teen comedy described as “a John Hughes classic” (modest!), which is set to be directed by Nzingha Stewart (Grey’s Anatomy) from a script by Sam Wolfson (Andi Mack). The film will follow a 16-year-old girl called Jodi “who, at more […]