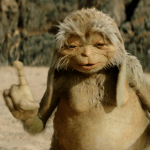 A trailer has been released for the upcoming family fantasy Four Kids and It. Based on Jacqueline Wilson’s 2012 novel, the film follows a group of children on holiday who meet a magical creature on a beach in Cornwall, who has the ability to grant wishes and features a cast that includes Paula Patton, Matthew […]