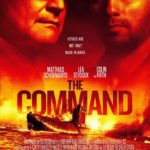 Ahead of its arrival on DirecTV laster this month, Saban Films has released a trailer and poster for Thomas Vinterberg’s upcoming thriller The Command (formerly known as Kursk).  Based on the true story of the Kursk Submarine disaster in 2000, and Robert Moore’s book A Time to Die, the film stars Matthias Schoenaerts, Léa Seydoux, […]