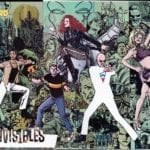 Famed comic book writer Grant Morrison has signed a new deal with Universal Cable Productions to bring more original and content for the television and streaming services. Per The Hollywood Reporter, one of the projects which fall under Morrison’s new deal is a television adaptation of his 90s comic book series The Invisibles. Set in 2020, The […]