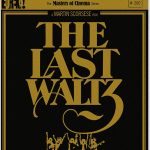 THE LAST WALTZ, Martin Scorsese’s legendary rock documentary featuring some of the world’s greatest musicians, is out now on Blu-ray as a part of The Masters of Cinemas Series, and we’ve got three copies to give away courtesy of Eureka Entertainment! Read on for details of how to enter… Perhaps the greatest rock documentary ever […]