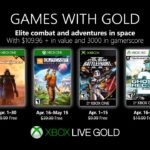 Microsoft has announced the lineup for Games with Gold for April 2019 – Pandemic’s 2005 Star Wars Battlefront II being the highlight. Action RPG The Technomancer will be available on Xbox One from 1st April to 30th April. Additionally, open world sci-fi title Outcast: Second Contact is available from 16th April to 15th May. You […]

Ubisoft have announced that the Open Beta for Tom Clancy’s Ghost Recon: Wildlands PvP mode titled Ghost War is on its way to all platforms.  This Open Beta is set to arrive this summer, and following this it will land on all servers as a free update come the Autumn. In Ghost War, two groups of […]