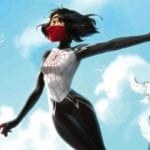 Last year it was announced that Sony Pictures Television is bringing the Marvel character Cindy Moon to the small screen with a live-action Silk TV series, and now Deadline is reporting that Watchmen executive producer Tom Spezialy has joined the project as showrunner. Silk is one of the first Marvel TV projects in development at […]